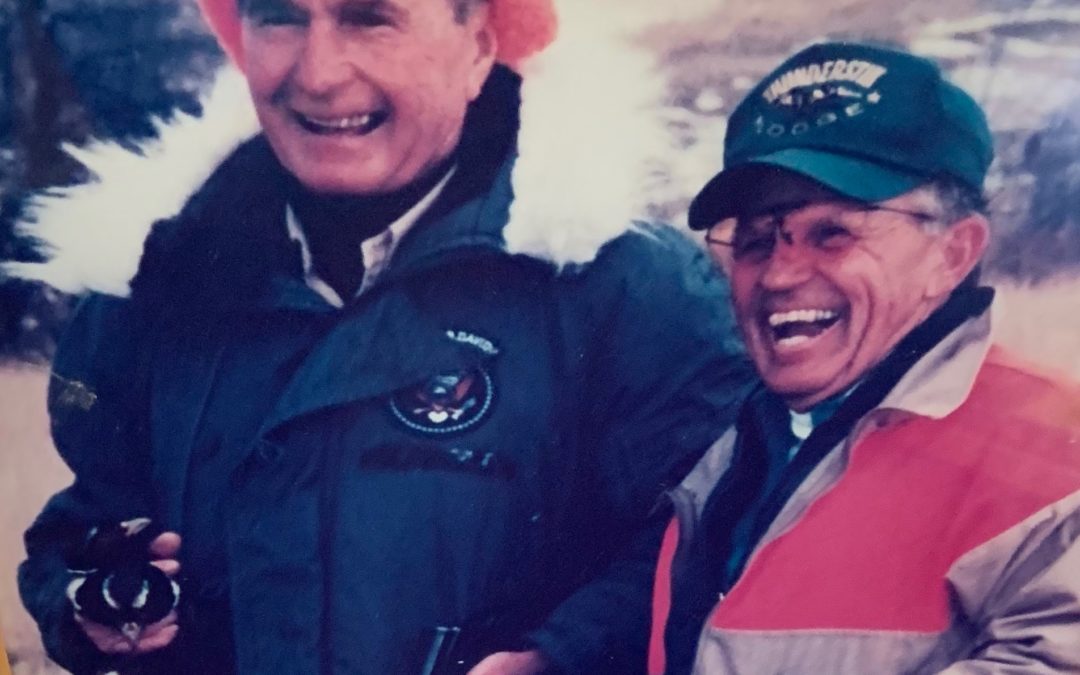 In honor of a great man – actually, one of the greatest men – the entire staff at Gage Outdoor and Thunderstik Lodge remembers President George H.W. Bush. Thank you for visiting our lodge – you will be missed but not forgotten!

The eulogy by his eldest grandson, George P. Bush is shared below:

Good morning. Today I stand before you as the oldest grandson of the man I simply knew as “Gampy.” George Herbert Walker Bush was the most gracious, most decent, most humble man that I will ever know. We are here to give thanks for his extraordinary life, but I would like to talk about some of the things that he was thankful for. The things that to him mattered most.

My grandfather was thankful for his family. When he began running for president in 1988, my grandfather released a campaign book outlining his views for the future. The book opened with a letter to a grandson. It was addressed to me and recounted some of our recent experiences together in Maine.

“P.,” the letter read, I have been thinking about it a lot. The most fun was the big rock boat, climbing out on it, watching you playing on it. Near the end of summer when the moon was full, the tides were high, there was that special day when it almost seemed like the boat was real.

In those few words, my grandfather said more about his life than I could ever tell you this morning. Here’s a man gearing up for the role of a lifetime, and yet his mind went back to his family. This is a book about policy issues, and yet he still found time to write about an imaginary boat that he built with his grandson. And in a typical day, he would wake up around 5:00 a.m. to review security briefings and grab his first coffee of the day.

And when the coast was clear, had the grandkids would try to snag a spot on the bed and nestle up between him and Ganny when they read the paper. We all grew up with my grandfather who would catch fly fishing off the rocks of Maine, talking up where the blue fish were running. He would be the first to host an intense horseshoe matchup among family, secret service, or any willing head of state, while encouraging trash talk like “power outage” if your horseshoe was short, or “Woodrow Wilson” if you’re long and your shoe hit the wooden backstop.

His typical spread included barbecue, tacos, tamales, pork rinds with hot sauce, with a healthy complement of blue bell ice cream and Klondike bars. Always the competitor, each night Gampy challenged all of the grandkids to the coveted “first to sleep” award. In classic Gampy fashion, he would write letters of encouragement to us all, whether one of semester at school, whether one of us and for the record, not me, drove his Fidelity onto the rocks, or when one of us, definitely not me, ended up in Gammy’s crosshairs. I knew too much.

At the close of one summer, after he left public service, Gampy wrote an e-mail to us all saying, “The only thing wrong with the last five months is that none of you were here enough. Next year, promise this old Gampster you’ll spend more time with us, here by the sea. As you know, I’ve had to give up fly fishing off the rocks in Maine, but there are plenty of wonderful things to do. I think of you all an awful lot. I just wonder how each of you is doing in school and in life. If you need me, I’m here for you because I love you very much.”