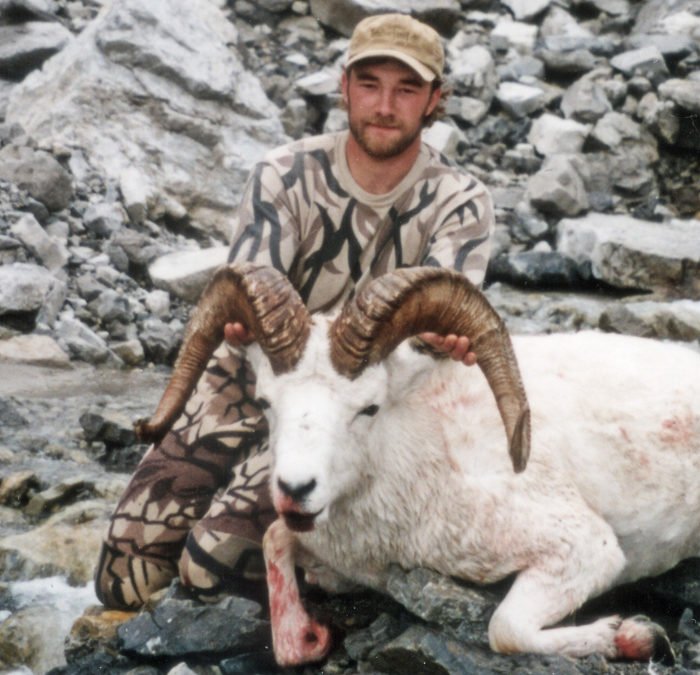 I can still see that pure white ram sky lined like it was yesterday. It was the first Dall sheep I ever laid eyes on. The wilderness back drop captivated my imagination, I was instantly hooked. I wasn’t on my first sheep hunt, not even on my way to my first sheep hunt. Rather, I was looking at the cover of a now deceased Canadian hunting magazine. I still have it at home and every summer I religiously pull it out to gaze at that very same ram that started it all so many years ago. Growing up on the prairies I wasn’t exactly introduced to sheep hunting at an early age. Waterfowl and Whitetails were the name of the game in my neck of the woods, but something clicked in my mind when I saw that white sheep standing on his rocky look out. From that day forward I pledged I would one day hunt those regal rams of the north. A few short years later my big break came. I was working for a PHD student, tracking radio collared skunks for a Ducks Unlimited project. I had just walked into our, “sweet” smelling camp, when I received a call from a horseback Outfitter in the N.W.T. Apparently one of his guides had broken his arm and they needed a replacement ASAP. Since I had sent a letter begging for a job a few months prior, my number came up, as all the qualified guides had already been working for months. The next thing I knew I was on a Twin Otter flying over the McKenzie Mountains trying to contain my excitement.

Landing at base camp I was immediately hit between the eyes with reality. If there was ever a time in my life when I had felt more out of place than I did now I couldn’t remember it. Forty horses, five guides, two wranglers and one unimpressed Outfitter busily went about their duties in hopes of pulling out of camp before dark. This new green horn standing before them wasn’t at all impressive. I didn’t have a clue what to do. I often say; if a bus, a plane, or a chopper would have come by at that moment I would have been on it! Thankfully though, over the next three days, I was able to follow the Outfitter and his hunter around, soaking in all the information I could. The hunting part came natural. If you can hunt you can hunt. The challenging part was everything else. Spending a couple hours every morning before anyone else was even awake, wading through creeks and crawling over deadfalls looking for the 20 horses you were responsible for was an eye opening way to start the day to say the least. Learning what ground was horse friendly and which ground was not often came at the expense of the horse. Learning how to free a horse submerged in a bog was also a new experience for me. All in all though, I welcomed the steep learning curve I faced every day, and if that is what I had to do to hunt the Dall rams, than that is what I was going to do. Eventually, I earned enough respect through hard work and stubbornness, and was handed the reins half way through the hunt.

My hunter and I left camp the next morning on my first official sheep hunt full of anticipation and ready for adventure, and adventure is what we got. A couple hours out of camp, and right out of the saddle, we spotted two sheep bedded above us in the rocks. We quickly tied up and found them in our binoculars. Both of them not only appeared legal, which at the time was ¾ curl, but looked to be past full curl. We came up with a game plan, but before we headed after them, both rams lazily walked out of sight. Instead of taking the patient, more experienced route, I chose the go get em’ attitude and off we went. A very long story short, six hours later I found myself faced with side hilling around the entire mountain bowl in hopes of catching up with the now spooked rams. Fortunately, my hunter was in excellent shape and as new to sheep hunting as I was. Sometimes ignorance is bliss.Might I also add, at the beginning of the hunt my actual hunting boots were mysteriously packed with the other groups gear, so all I was left with for foot wear were some black rubber moccasins I had planned to use for camp shoes. My well aged feet cringe at the prospect of having to do it now, but at the time, nothing was going to keep me from my first ram.

A few miles of side hilling the steep shale slope eventually brought us to a large hogs back that split the deep rocky bowl in two. Earlier, we had watched both rams drop over this very ridge. Although at the time, we had been a good mile behind them, we were confident they were just over the ridge as we hadn’t spotted them coming out in either direction. We prepared in hopes of a shot. Taking our packs off, binoculars at the ready, I had my hunter chamber a round and put his gun on safety. I took a step, and then glassed below. Finally, as we were completely over the crest, a ram simply stood up 50 yards below us. Panic stricken, I fumbled with my binoculars to find the ram Broadside. Counting growth rings through the shaking glass, I was nervously confident I had it right. My hunter couldn’t see the ram, and his scope was now fogged up. We franticly tried to wipe his scope clear. First, with my sleeve, then with some crumpled wet Kleenex; can you say panic! Thankfully, the relaxed Ram was in a trance as he continued to stand broadside, seemingly without a care in the world. Then, just as the scope was usable, a loose rock tumbled from our feet alerting the ram. It was too late. At the sound of the bullet hitting the ram he crumpled and began smashing into the huge boulders as he tumbled towards the distant rocky creek bottom. Then the other ram stood up. “Oh, oh”, I thought.This other looked huge! I tried to down play it but I couldn’t help but watch this 2nd Ram make his sluggish retreat. He appeared to be extremely heavy horned as he walked straight away and eventually disappeared over the distant ridge and into the adjacent valley. Had we made a mistake? Had we shot the wrong ram? Both original rams were legal, or so I thought. The anticipation was at a fever pitch now. I couldn’t wait to reach the ram but at the same time my anxiety over his size was uncomfortable at best. I just kept telling myself, “as long as he is legal”, “as long as he is legal”. Yet, when I replayed the events, I was positive he was old enough and more than certain he met the length requirements of ¾ curl. Nevertheless, I was relieved to finally reach the ram to see in fact he was more than legal. The pack back to the horses was all downhill. My not so quality foot wear were beginning to give me some grief as the jagged rocks cut into my exposed feet. I tried to fool my mind by replaying the day over and over. We hadn’t exactly pulled off a classic stalk but did manage to stick with it not giving up, and were eventually rewarded. Now with light fading and a four hour ride back to camp, I wondered just how this next segment of the hunt would unfold. After tightening up the cinches, I led my horse Rip out of the sparse stunted timber and pointed him in the direction of camp. My heavy pack swayed back and forth with each one of Rip’s steps, as I soon found out, riding with an 80 lb pack wasn’t very comfortable. The sun was now behind the grey, rocky cliffs that framed both sides of the eroding river bank we were now following. If we continued along this exact river it would lead us directly to camp. The only problem was, we had crossed this small river at least ten times on our way down, in broad daylight. I was about to get my first “hands on” lesson in traveling in the dark.

It became quite clear that Rip and I were on a different page. He fought me from the start. If I wanted to go one way he wanted to go the other. By this time my hunter was asking lots of questions. How big do you think my ram is? How much further is camp? Do you know the way back? Will they be waiting up for us? All great questions, but when you don’t know any of the answers it gets old in a hurry. I tried to imply confidence with my generalized answers and eventually I think the highly educated Doctor got the hint as he became ghostly quiet. It was now pitch black. Prior to darkness, I was able to make out the odd horse track from our route down earlier in the day. Now however, it was obvious, even to me, that I would have to fully trust old Rip to find our way home. I relaxed the reins completely and he confidently powered forward. I wasn’t convinced he could do it just yet, but as the miles piled up, and with many successful river crossings, I eventually had total confidence that Rip knew exactly what he was doing. Lesson learned! The distant glow of the Coleman lantern gave camps location away; I can still see that faint glow in the back of mind to this day! All the day’s earlier uncertainties were now being replaced with one emotion. Pride! Pride is was what I felt, as we strolled into camp. I sat tall in the saddle as my fellow guides came out of the weathered wall tent, helping us with our horses in the black of night. The immediate congratulations and back slapping confirmed we had taken a good ram. The sense of acceptance was satisfying. To know I could do it, start to finish, gave me the powerful confidence needed to continue on with what I knew I could do. That day I became a sheep guide.