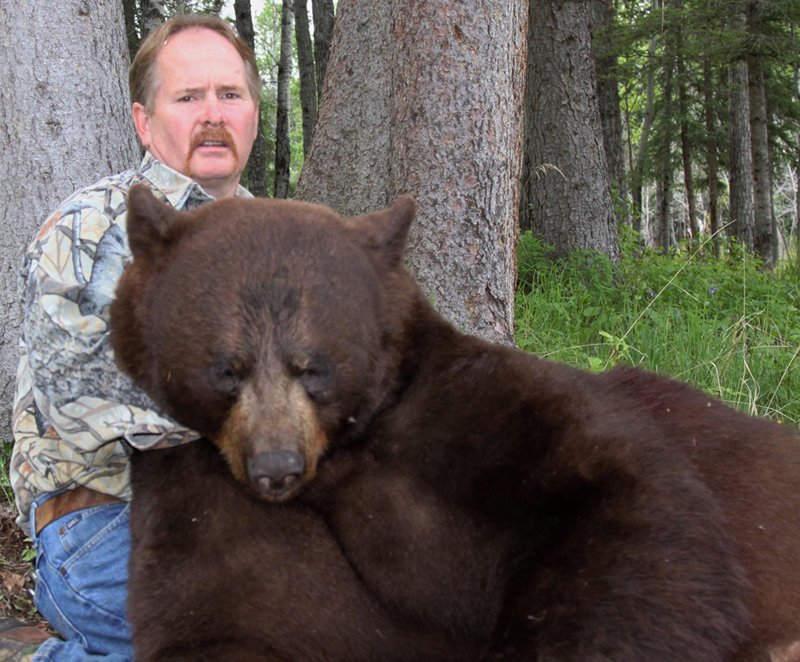 “When are you going to come up and give Bear hunting a go”, my guide Brad asked.We had just completed a successful 2 week long Moose and Caribou hunt where we managed to take some exceptional animals and were now just relaxing on shore, waiting for the float plane to come in. “Bear hunting…..I don’t know, is it really any kind of a challenge”, I replied. “It’s as challenging as you want to make it”. The distant drumming of the incoming plane interrupted our conversation as we began to double check our gear for the flight back to civilization. I must admit, after that, I never gave Bear hunting another thought until I was back up hunting Whitetails with Brad a few short months later. One of the other hunters in camp that week had hunted Bear with Brad that spring and took a beautiful Boar. His pictures and stories jarred my memory and I actually began thinking of Bears on a regular basis the remainder of the hunt. A few days later I connected on a nice Saskatchewan Whitetail with my bow and began to inquire seriously about a possible bear hunt for the next spring. Having hunted with Brad for over a decade I didn’t have to worry about how I was going to be looked after. I mainly needed to know the basics; when is the best time, what to bring, are there any openings, etc. Again, knowing Brad, I knew where his passion lays. He lives for the challenge of producing trophy quality animals and trophy quality experiences no matter what he is guiding. I didn’t even bother to ask what to expect size wise, knowing full well I would be educated on arrival of what we would be looking for.

The daylight hours gradually began to increase along with my anticipation as May finally arrived and I was off to Saskatchewan. The drive to camp, from Saskatoon, was filled with deer sighting after deer sighting, leading me to believe the winter had been kind. I began to think of huge Whitetails and the prospects for the upcoming fall hunt. I had to force myself back to the task at hand and think about Bears. My brief education on the subject soon surfaced and I realized I would need all the help I could get to have a sniff at judging these brutes of the forest. That afternoon a massive storm front pushed in and it rained buckets! There were rivers where there were no rivers! Brad didn’t have to convince any of us that it would be a camp evening. The next morning the weather was still drizzly and gloomy but Brad was heading out anyway to check some cameras and do a little baiting. I jumped at the chance to join him when he invited me to go. On our drive out of camp Brad asked if I minded him videoing my hunt that evening. I didn’t hesitate in saying yes; knowing full well Brad would certainly be a better judge than I. After checking a few stands it was becoming clear I would be seeing plenty of Bears. Every stand we went into we bumped Bears off, and it was the middle of the day! The third stand we checked, I was busy checking out the tree stands, when I heard Brad get real excited. He called me over and showed me a picture of a Bear on his card reader. It was as if the huge brown boar posed purposely for the picture. He was awesome! Brad assured me it was a trophy in anyone’s books and if the wind was favourable we would be sitting there that night. We in fact did sit that stand and although we managed to see 4 or 5 bears and one decent one in the 18’ range, the big brown didn’t show. The following night the wind was identical and again we climbed into the same stands as the night before. This time we saw a few more bears and all but one were different. The big guy however was still no where to be found. With the weather remaining poor and with a new wind direction, Brad informed me we would change things up and try a ground blind he built along a good sized river. After a short hike in that evening, I found myself sitting on the ground literally surrounded by black bears. If you have ever seen one of those shark documentaries where there is a guy with a fish in his hand surrounded by a sea of hungry sharks then you know what it was like. The first bear in, actually walked by us at less than 2 feet totally unaware of us. I heard it breathing before I saw it. Interestingly enough, although the bears couldn’t smell us because of the wind, when one got within a few feet, they seemed to have a sixth sense about us and backed off. Although not producing a shooter it was an exciting night to say the least. The following day everyone in camp was perked up and optimistic as the weather finally broke bringing in high pressure and clear skies. Since all of the baiting chores were done and we had a few free hours, we went Walleye fishing. Now, I may not be an experienced bear hunter but I have caught a fish or two, so I was more than eager to wet my line. An hour after we hit the water we had landed ten Walleye and 2 Northern Pike. The walleye were huge for this far north, a couple were in the 4-5 lb range and all were over 2 lbs. We kept enough for a late night snack and hurried back to camp to get ready for the nights action. I knew the wind would be right for the big brown’s stand again, so I didn’t even ask where we would be going. I think one of the reasons Brad has been successful over the years on trophy calibre bears is he doesn’t hunt a stand unless conditions are exact. If the wind is wrong, you don’t go there, no matter what. So when you do sit a stand you are not dealing with a bunch of educated bears. Anyway, I could tell from Brad’s demeanour that evening, that he was expecting some action.

Walking in, we were greeted by a young blonde boar that wasn’t at all interested in leaving. We made a wide detour and managed to get situated while the blonde watched with interest. As most young bears do, he showed poor judgment and if he wasn’t in Brad’s concession, I am sure he would not live long, due to his unique color. After entertaining us for a half hour or so, the blonde got comfortable and actually laid down for a nap. Little did he know his nap would be short lived. In a matter of seconds the docile evening turned to chaos. A black sow stormed onto the scene and immediately chased the sleeping youngster up a tree. Flanking her, and just back in the thick brush, another bear circled popping its jaw. I looked over at Brad and he didn’t say anything, he just gave me the look and I knew it was the big brown. As I turned my head following the path of Brad’s camera I saw him too. The massive boar was leering right at us from 30 yards, protected by the thick swamp spruce. The object of the big browns attention had now settled down, content with loading up on calories. He didn’t want to be there, but he couldn’t help it. Luckily for us, she was hungry. Over the next 30 minutes, our scent continued to head skyward. If it hadn’t, there was no question this old boar would have rounded up his lady friend and disappeared. He knew something was up but couldn’t confirm it with his powerful nose. A few times he worked within seven yards behind us, but never presented a clear shot. He was slow and methodical, checking the entire area. The game was intense and could go either way at any time. Eventually, he gradually let his guard down and worked his way out front, still hanging tight to the cover of the tree line. It was still far from a sure thing .He was at 10 yards now, just with his head exposed when he started walking forward. If he went right, he would continue on his earlier path. If he stepped left, I would get my shot. With the added pressure of Brad’s camera rolling over my shoulder, I drew back as he stepped left. The huge boar was confident as he strolled into the open. Stopping perfectly broadside to glance up at us one last time, I released my arrow. The lighted nock disappeared behind his shoulder and passed completely through, as the old bear whirled, heading back the way he came from. Seconds later, the big browns last sounds, confirmed a killing shot. I don’t know who was happier me or Brad. We didn’t waste any time getting out of our stands and had to wade through the black sow and young blonde to get to my arrow as they were in no hurry to leave. Keeping an eye on our two spectators we picked up the trail and within 40 yards found my bear. What a beautiful animal! His hair was thick and perfect. He was awesome! We celebrated our success and shot some video for a few minutes. After regaining a little composure I wondered how on earth we would get this guy out of the woods and back to camp. Brad assured me it was possible and minutes later, as we tipped the ATV backwards, I began to realize how. With a lot of effort, we simply ratchet strapped the bear onto the back rack of the ATV the best we could and then on the count of three, pushed the ATV over, bringing the bear with it. It worked slick, even with the 400 odd lbs of bear. Although being a rookie bear hunter at the start of this trip I can honestly say it was the best time I had ever had in Canada. The fishing, the relaxed atmosphere and the unending bear encounters made for an unforgettable experience. The only thing I am worried about now, is at the end of the hunt, Brad asked me, “When are you going to come up and give Dall Sheep hunting a go”!